Our Mother Church in Egypt 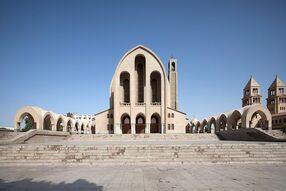 The Coptic Church is based on our Lord Jesus Christ's teachings conveyed to us by Saint Mark who brought Christianity to Egypt during the reign of the Roman emperor Nero in the first century, a dozen of years after the Lord's ascension. He was one of the four evangelists and the one who wrote the oldest canonical gospel. Christianity spread throughout Egypt within half a century of Saint Mark's arrival in Alexandria.  The Coptic Church, which is now more than nineteen centuries old, was the subject of many prophecies in the Old Testament. Isaiah the prophet, in Chapter 19, Verse 19 says "In that day there will be an altar to the LORD in the midst of the land of Egypt, and a pillar to the LORD at its border."

The Coptic church regards itself as a strong defendant of Christian faith. The Nicene Creed, which is recited in all churches throughout the world, has been authored by one of its favorite sons, Saint Athanasius, the Pope of Alexandria for 46 years, from 327 A.D. to 373 A.D. This status is well deserved, after all, Egypt was the refuge that the Holy Family sought in its flight from Judea: "When he arose, he took the young Child and His mother by night and departed for Egypt, and was there until the death of Herod, that it might be fulfilled which was spoken by the Lord through the prophet, saying, "Out of Egypt I called My Son" [Mathew 2:12-23].

Who are the Copts?

The Copts are descendants of the ancient Egyptians and are from the civilization dating back to 3000 BC.  The Word "Copt" comes from the Latin word "Aegyptus," meaning "Egypt".  In the Arabic language, the word "Misr" [Egypt] comes from the word "Mizraim," who is the son of Ham, the son of Noah (Gen. 10:6).  He is the one who came and lived in valley of the Nile.  In the Coptic language, Egypt is called "Kimi," meaning "the black land," because of its black agricultural soil.  Its dwellers are the dwellers of the black land, or the sons of Ham (in Coptic - Remenkimi).